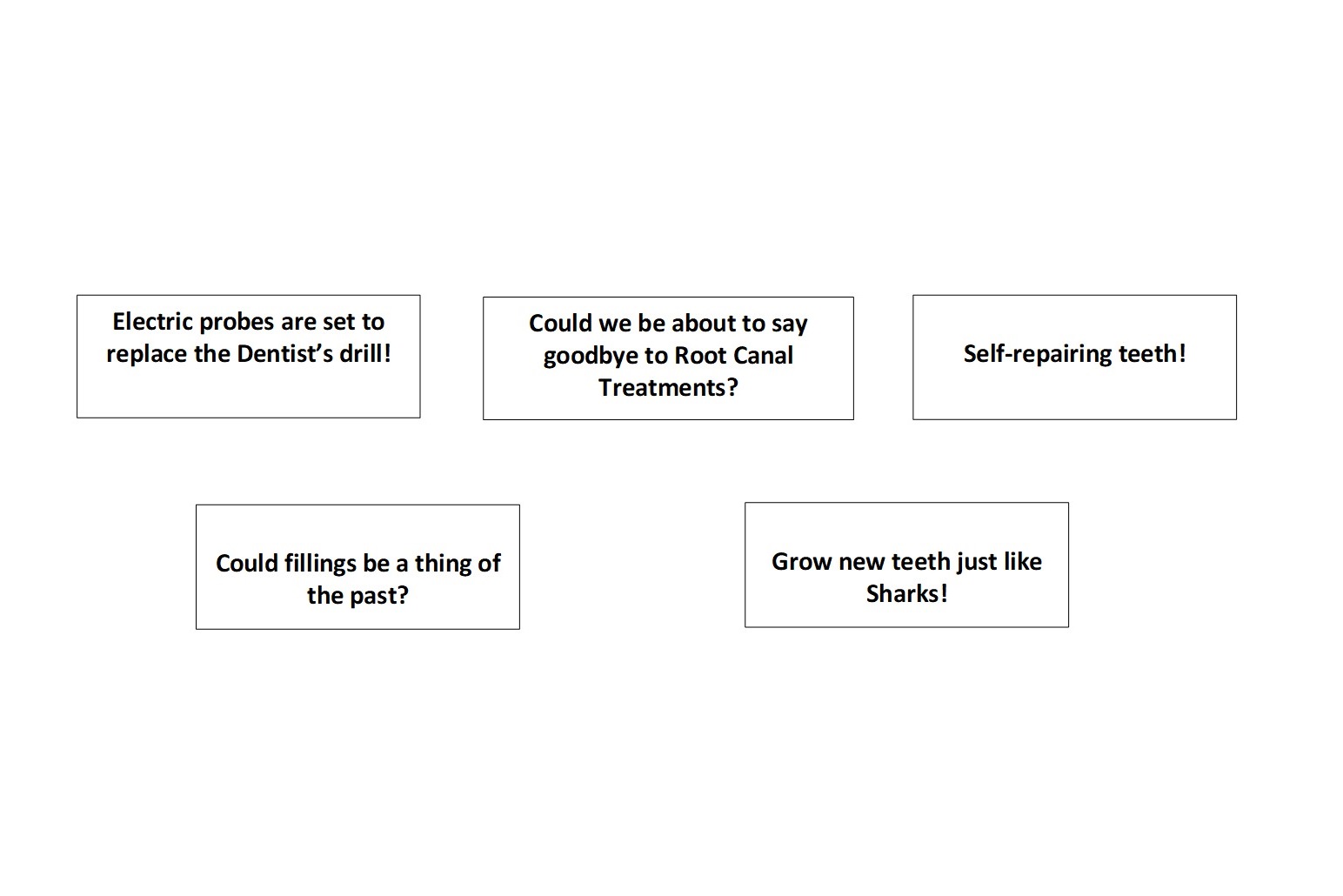 If you think you’ve nodded off and woken up reading a dental sci-fi novel…. think again! These bold statements are poised to become reality over the course of the next few years and revolutionise the industry. So here is a whistle stop tour and a brief taster of things to come…

1. Electric probe to replace the drill – Sounds off for a quieter environment!

Most people fear the dentist’s drill. Electrical impulses can offer a pain-free way to repair teeth showing early signs of decay through remineralisation and bring to an end this less than popular treatment.

Minerals naturally move in and out of teeth and tooth decay is a natural consequence of minerals leeching out from the teeth due to acids produced in bacteria. These weaken the tooth and hasten tooth decay.

The new treatment, called Electrically Accelerated and Enhanced Remineralisation (EAER), uses a tiny electric current to push minerals, present in saliva and food, into the deepest layers of the tooth. This helps the tooth heal and actually strengthens it. The device, originally developed by researchers at Kings College, London, is expected to be at least as cost-effective as current dental treatments and should be available in the next couple of years.

A joint venture project by scientists at Nottingham and Harvard Universities have developed regenerative fillings that allow teeth to heal themselves. The new synthetic filling material stimulates stem cells (which have the potential to become any type of cell in the body) to encourage the growth of dentine, the hard tissue which forms the bulk of the tooth. This should allow patients to effectively regrow damaged or decayed teeth rather than having a filling. This new filling material, can regenerate the inner pulp as well as the surrounding dentine, paving the way to potential do away with the need for root canal treatment.

Work is under way on an ultrasound device that could take the form of a wand or mouth guard that helps repair broken or decayed teeth. An initial study has shown that a blast of ultrasound can stimulate stem cells in the teeth. Once stimulated in this way they start to multiply in number and turn into the cells that make up teeth.

The study by Birmingham University, involved cells extracted from rats’ teeth but the team believes it will be possible to use the system to heal human teeth in the mouth.

The team hope to be testing a prototype tooth-repair device in tests by 2021.

4. Could fillings be a thing of the past? – How to fill the void?

A new liquid,which identifies the extent of tooth decay could prevent unnecessary fillings.

Tooth decay goes through two stages: an initial stage when there is a weakening and signs of decay but no cavity and a later ‘cavitated’ state where a filling is needed to stop decay from progressing into the inner pulp of the tooth. Currently, dentists do not have a test to determine the difference between the two states so you may get a filling as a precautionary measure.

A liquid, known as Cavifind has been developed by researchers at The Creighton University School of Dentistry in Nebraska. When this is applied to the surface of the teeth prior to a dental X-ray, the dentist can see whether a tooth has decay and needs to be filled or whether the decay can be treated without a filling, for example with topical products to seal any small holes.

The liquid will appear white on the X-ray. If there’s a hole in the tooth, a white area will show beneath the tooth surface. If there’s no hole, the area above the tooth will show up white.

It is anticipated that Cavifind will be on the market by early 2018.

Sharks can naturally repair their teeth and now scientists are close to understanding this and applying it to humans. Sharks in common with a certain fish, have rows of teeth that regenerate throughout their lifetime. Recently researchers at the University of Sheffield identified a special set of cells, called the dental lamina, which contain genes that prompt this continuous tooth development in these aquatic species.

The good news is that humans also possess dental lamina cells in the gums, however only two sets are formed, our baby and adult teeth, before this set of specialised cells are lost.

Researchers do feel though that this new knowledge, will enable them to develop new treatments for human tooth loss within the next decade.